What’s in a Word? (Article)

Home NewsWhat’s in a Word? (Article) 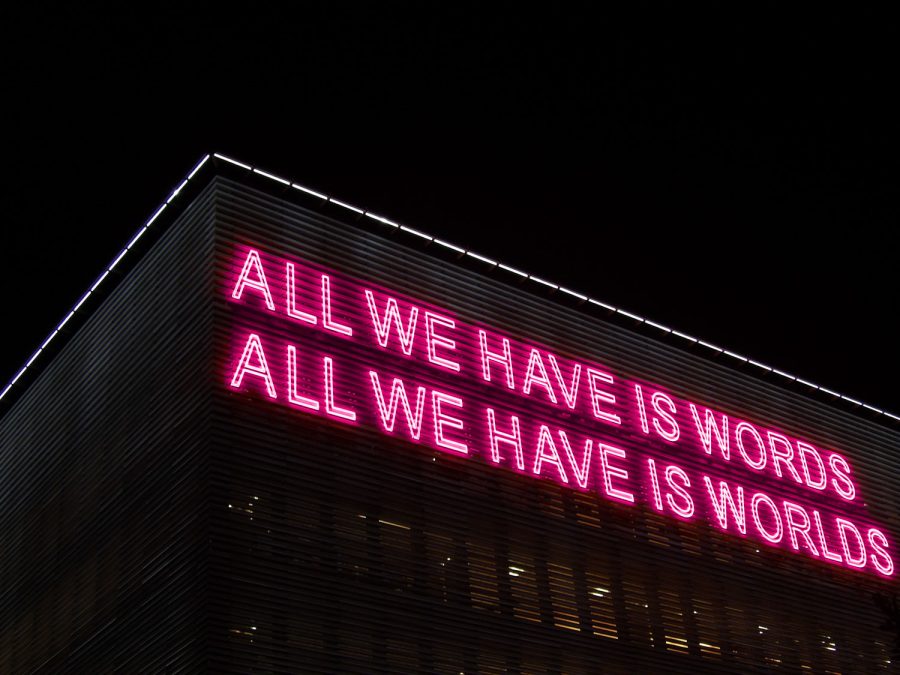 What’s in a Word? (Article)

You can make profound changes to your sales conversion rates by paying attention to words. But how easy is it to get the right words and how should you choose them?

What’s the most important thing in selling?

You’ve already heard all the cliches and all the usual advice: 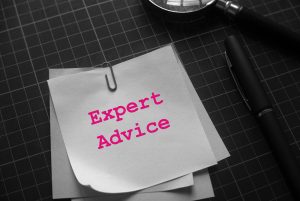 Does any of this help? Maybe, but probably not terribly!

Whilst there is some truth in each of these points, meeting every one of them is going to need a load of work, time and investment on your part.

So let’s think about something that is really important for sales success, something that can be incorporated into every day selling relatively quickly, easily and at very low cost … 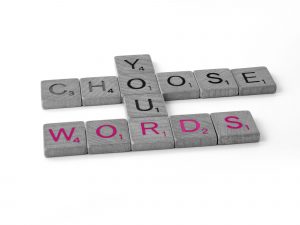 OK, but what does “the right words” mean?

Firstly deliberately, using words that put your buyer at the centre of the universe and avoiding those where the exact opposite is true. (This is called “audience-centricity”).

And, secondly, using positive, value-laden words that audiences can immediately link to the benefits that they believe they will enjoy, so helping them more easily envisage the advantages they will gain when they buy your services or product.

Make it Matter to the Audience (Audience-Centricity: from “Us” to “You”) 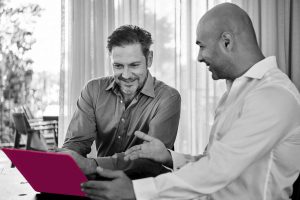 Next time you have the opportunity to observe a junior salesperson in the field try playing a little game. Every time the salesperson says “we” or “our” or “us” make a record in your notebook or phone.

If the salesperson gets through the meeting with less than 20 points they’ve done really well. But expect them to say “we” or “our” at least 30 times.

Focus on the Why? (What benefits will your audience gain? Your “Value proposition”) 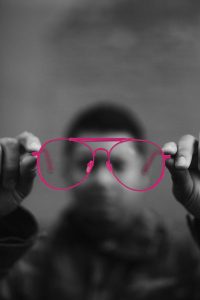 Approximately 90% of sales people consistently put themselves and their products at the centre of the so-called sales conversation, hence the consistent use of words like “us”, “we”, “ours”.

It’s now time to flip the conversation 180 degrees and put your audience first.

We know what you care about – making the sale, of course! – but the most important question to ask yourself is this: “What does the audience care about?”

These are typical reasons why someone might want to buy from you.

If you know in advance of the conversation what’s going to excite your audience then simply focus on that from the get-go.

In other words, home into “the why” … the tangible benefits that your prospect will enjoy from your solution.

But you won’t always know. That’s where asking questions comes in.

But please don’t ask questions for the sake of keeping the conversation going! 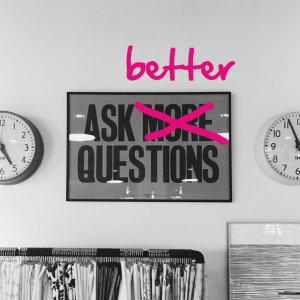 Get prepared and be ready with a list of good questions, relevant questions; the sort of questions that trigger an intelligent and considered response from your potential buyers.

When you ask the right questions you help your buyer to move towards a more informed position.

By adding value in this way you develop trust, and people always prefer to buy from suppliers they feel they can trust. Imagine a simple example.

An environmentally aware daily commuter has resolved to stop commuting to the office by car and has decided that she wants to get to the nearest railway station – about 10 miles away – by bike, ideally as quickly as possible. So she’s in the market for a modern, lightweight racing bike. (Or at least she thinks she is).

She walks into the first bike shop and informs the salesperson that she’s interested in a racing bike. He shows her two or three new models and says that her final decision boils down to what she is prepared to spend. But since she’s not sure on her budget yet she says she’ll have a think about it. 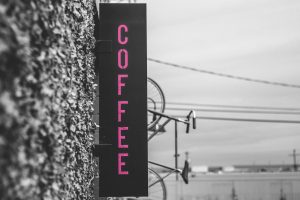 Whilst having a coffee nearby she sees another bike shop that she’s never noticed before and she pops in there after the café on the off chance that they might have something for her.

She asks the friendly assistant to show her some racing bikes.

“Sure”, says the salesperson, “but before we go and look at some bikes can you just tell me why you need a bike and how you might be planning on using it?”

Our speed-hungry eco-commuter explains that getting to the train station and back as quickly as possible is key and expresses her desire to do the 10-mile trip in less than 45 minutes. At this point the sales assistant has a great idea.

Actually, the fastest way to the station from her home by bike isn’t via the roads she currently drives on, it’s by cutting through the woods and parks using a new cycle way.

There is a problem though: the cycle way can get wet and muddy in the autumn and winter and the commuter can’t appear at work splattered in dirt.

By the end of the conversation the commuter has placed an order for a mid-range mountain bike with big, protective mudguards plus waterproof over clothes all for around the same price as the cheapest racer she was shown in the first shop. 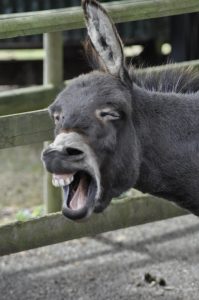 She’s delighted that she’ll now be able to get to the train station in around 30 mins by the more direct cycleway route, whilst being protected against the worst of the weather. Plus she has the option for future weekend bike adventures in the nearby hills as an added bonus.

An old adage once stated that a good salesperson should be able to talk the hind leg off a donkey.

That was never true, and it is even less plausible now.

There’s so much content in the world that your role as a seller has to involve guiding prospects quickly, efficiently and without waffle to what is important to them.

Your sales argument should have just three, four or five core ideas and should be structured simply around these.

This is “chunking” – keeping everything nice and simple but always relevant to your audiences’ interests.

You might have 15 or 23 or 71 things that you could talk about. Now is the time to be thoroughly ruthless; strip it down to the most important three to five concepts.

Be Visual (if Possible)

If you can summarise the main benefits in a single, powerful picture you – and your prospect – are in a really good place. Because clarity sells.

If you are using PowerPoint you can present your stripped down – chunked – ideas visually in a way that your audience will understand best.

Remember: it’s critical that you land on the most important three to five concepts that will resonate best with target audiences which can then be quickly visualised, and word-smithed. 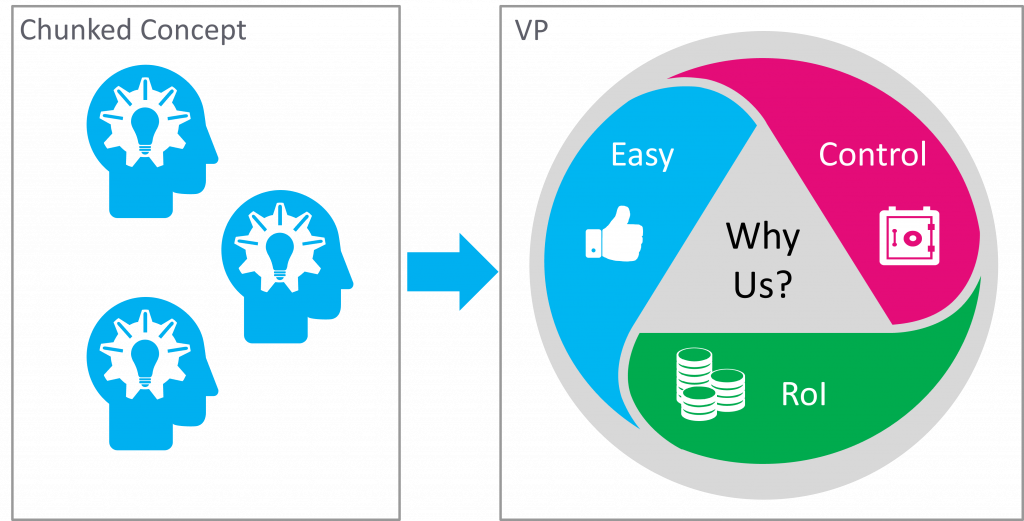 If you are just chatting informally – and without any formal visual aids – even then having a crystal-clear mental picture of your picture will greatly help you. 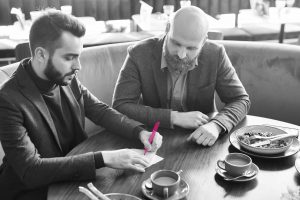 Because you’ll have your simplified picture etched into your brain.

So it’s really easy to reference it!

Plus, there will certainly be times when you will be able to use paper, whiteboards or even napkins to reproduce your killer Value Proposition picture seemingly “on the fly” with your informal audience.

Use the right Words – Sometimes it’s All we Have

No matter how powerful your visuals, you will still need to present your ideas using words, be they spoken and / or on your slides.

What’s in a word? Well, quite a lot! Sometimes words are all we have. 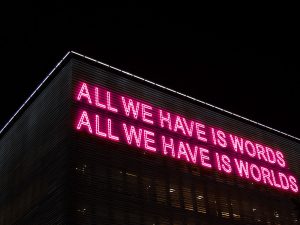 After all, we are trying to build a powerful, convincing sales argument chunked down into just three, four or five core concepts; and that means just a handful of words.

So, we’ve got to pick the right words with real care, to be sure that the words we land on are the ones that trigger our audiences to action in the most powerful way possible. And by “action” I mean make the decision to buy from you.

For example, going back to the commuter bike case, words like “easy”, “speedy”, “cost-effective” are far better than words like “drop handlebars”, “11-speed gears” and “carbon fibre frame”.

That’s because the second group of words and phrases here are to do with product specification, that is, features. 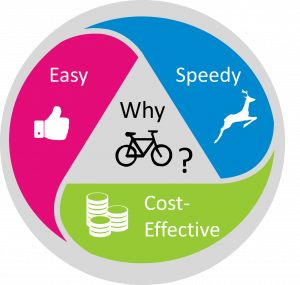 But the specification is largely redundant once primary need – the perceived benefit – has been established. (Here primary need was getting to the train station quickly and cleanly).

Selling to identified, agreed business need is always a more successful sales method than pushing specifications and getting lost in a mass of irrelevant facts and figures.

As a sales professional always concern yourself with “the Why?”

Why should your audience want to buy from you?

The right words – especially when combined with good visuals – will greatly assist you in closing the sale.

Finally, use a process to get to the right words for your solution. 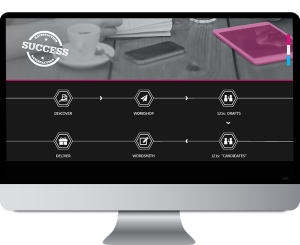 Some salespeople come across as absolute stars who were born with the gift of the gab. But most succeed because they work hard and thoroughly prepare in advance of their sales meetings.

Productive sales meetings demand high levels of focus and attention, which can lead to fatigue.

Recognising this means that we should do as much preparation before our meetings as possible, keeping ourselves fresh to be able to listen attentively and respond with relevant examples, anecdotes and pertinent questions to put prospects very much at their ease.

This is where coming together as a team can really help.

Quantum recommends that everyone on the team meets to work out the most compelling value proposition for audiences and, in turn, to articulate the value proposition in the best, most value-laden and exciting words for prospects.

A review of current materials and approaches can be helpful prior to the team workshop and the development of initial drafts. Subsequent advanced drafts are refined and carefully word smithed before the new VP – and any supporting materials – is delivered to the Sales team.

The overall result emerging from this sort of process is a clearer, more attractive value proposition that can be consistently well-articulated by all.

Complement the crisply worded VP with an improved sales presentation for even greater impact.

Harness the power of words to sell more. 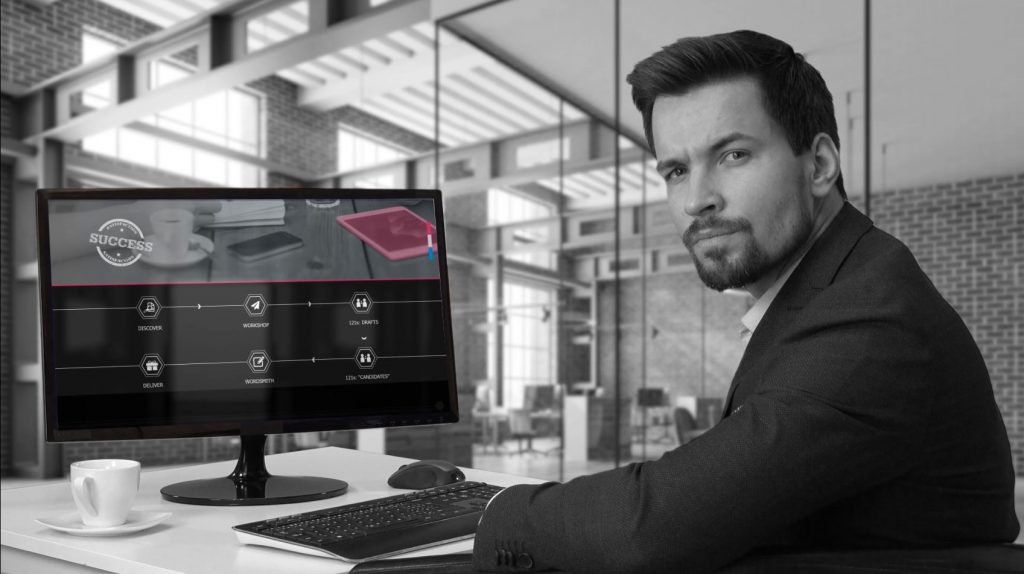 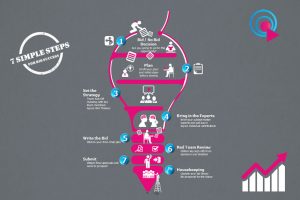 When it comes to winning business on the back of[...] 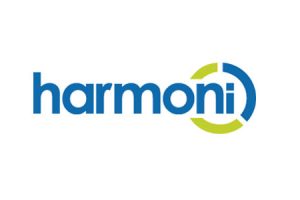 He [Quantum director] has had a major impact on the quality of the proposals submitted to clients and our final presentations, as well as helping define and improve our internal systems and processes. 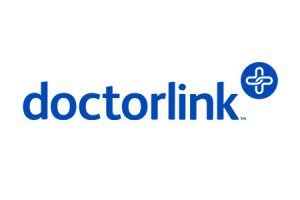 The sales proposals and presentations that they developed with us were outstanding. The underlying messages were simple and crisp, appealing directly to our targeted audiences. Their role in delivering key sales wins in London and in the South West was absolutely invaluable

6 months ago 3 years ago

We're currently offline. Send us an email and we'll get back to you, asap.